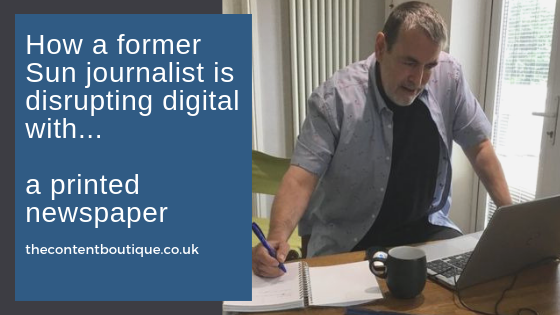 Read all about it! Loz Hatton, Founder & Editor of The Ilkeston Inquirer reveals why he set up a local printed newspaper. Also, how to write a compelling headline.

From what sources do you get your local news?

Yup, I thought so.

The reason why local newspaper circulations are in rapid decline is that more and more of us get our news from the Internet care of our mobile devices.

So what’s the problem? Undoubtedly, digital helps news to travel fast. And it’s always up to date.

But, you could argue your sources of news lack trustworthiness, authority and above all, balanced reporting.

American Business Magnate and newspaper publisher Warren Buffet summed up the problem when he said: “If you want to know what’s going on in your town – whether the news is about the mayor or taxes or high school football – there is no substitute for a local newspaper. Wherever there is a pervasive sense of community, a paper that serves the special informational needs of that community will remain indispensable… papers delivering comprehensive and reliable information to tightly bound communities and having a sensible internet strategy will remain viable for a long time.”

When I found out that my half brother, Loz Hatton, a recently retired Fleet Street sub-editor had set up a regional newspaper, I was surprised and intrigued.

Is he mad? Is it at all possible to convince people to turn back the clock, give up the convenience of news on tap and buy a local newspaper?

But then again, perhaps he’s onto something. So I asked Loz about his new venture. And this is what he told me:

First, let’s start with your story. How did you get to where you are today?

I trained at journalism college in Darlington and spent 30 years working on Fleet Street, starting off at the Mirror and then moving to the Sun. When I retired last year, I moved back home to Ilkeston.

You’ve recently set up a local, printed newspaper. Tell me about it.

If a national paper were to launch a new title, it would carry out at least six months of market research and cost calculations.

It wouldn’t be a last minute thing. Unlike The Ilkeston Inquirer, which pretty much was!

My inspiration came from a local smoothie shop owner called Paul. He’s involved in the local history society and puts out a monthly magazine. When he heard I had come back to town, he asked me to give him layout tips.

While advising him, I realised I missed my old trade. Moreover, I reckoned there might be an opportunity here. What if I could fill the gap with proper news in a decent local paper? So that’s what we decided to do!

Who is in your team?

I’m supported by my wife Mary, my brother and business partner David and his wife Tracy and various other members of the family. What’s more, I’ve got a few other Fleet Street journalists helping me out for free. It’s a tight team. No one is getting paid.

Tell me about Ilkeston. Where is it, and how big is it?

Ilkeston is a town in the borough of Erewash, in Derbyshire, with a population of around 40,000 people.

An industry metric states on average every copy of a paper gets read by three people. So we decided a print run of 10,000 copies would pretty much cover the whole town.

How do you distribute the Inquirer?

We don’t have professional distribution. The print run gets delivered to my garage. I have to say in all my years working in papers, I never actually knew what 10,000 copies of a printed newspaper physically looked like! Did I mention our other role? We’re paperboys! We post them through letterboxes.

Do shops distribute the Inquirer for you?

We’ve had special bins/display stands made up and have dotted them around town and in supermarkets.

Do you think regional towns suffer from a lack of proper news?

Poor old Ilkeston was getting a lousy deal news-wise. The Ilkeston Inquirer is here to fix that.

So what sort of stories do you hope to cover?

Enough happens in this town that we can fill up our pages with interesting stories, that aren’t appearing anywhere else.

In fact, our second edition carries page after page of exclusives. Our big advantage is we all live in Ilkeston. We’re not based in Chesterfield. We’ve all got big families. So there’s not much that happens that we don’t get to hear about.

And if we can get enough advertising and increase the pages, we’ll be able to cover all the stock in trade useful and relevant things people are interested in.

We do give the Inquirer the tabloid treatment. And try to be clever with headlines. But I don’t think there’s anything wrong in that. Local news doesn’t have to be boring. And we do tackle serious issues as well.

Is the Inquirer attracting advertising?

One of the things we’ve discovered is, not only have local people been deprived of decent news, but local businesses haven’t had a proper place to advertise. It’s no good them advertising in what effectively is a Chesterfield paper. Their target Ilkeston audience doesn’t read it!

How often do you plan to publish?

In the future… I think a fortnightly paper would undoubtedly be a good read. But that’s down the line. We’d have to turn over enough to contract out the distribution.

What was the reaction to the first issue?

The first issue of the Inquirer had a fantastic reception in town. People desperately tried to get hold of a copy. We had to tell them to wait a few days for the next issue!

Do you worry about how you can compete with digital?

It’s a generational thing. People in their late teens or early twenties don’t want a newspaper. But older people don’t look at Facebook, or online to get their news. They value a good old fashioned printed newspaper.

Will you publish a digital version? You have a PDF version, but it’s not mobile friendly

We’d need to employ full-time people to maintain a web version. We don’t have the resources for that. So again, it is something that is down the line. We will have to see how things go.

How do you see the future for printed newspapers?

There is no getting away from it; undoubtedly, printed newspapers will move online. It’s not environmentally friendly chopping down trees, making paper, printing and shipping papers here there and everywhere, when you can just sit and call up stuff on your phone. So yes, 10, 20 and certainly 30 years down the line, I doubt very much you will see a printed newspaper.

Thirty years is quite a long time?

Maybe I’m a bit optimistic with 30 years. The trouble is, and I know this from working in national newspapers. It’s difficult to monetise newspapers on the Internet. Certainly, on The Sun, it’s hugely expensive to run a massive online operation. It sucks resources, and you don’t get much back from it.

But no one wants to pay to read the news on the Internet, as the Sun found when it put up a paywall.

Do you think your tabloid style of writing will attract younger readers?

I think we’re going to gain a bit of a following from younger readers. I wouldn’t be at all surprised if some of those who just walked on by, later picked it up and thought, well actually this is a good read. I think it is just reeducating them a little bit.

Newspapers don’t have to be old fashioned and boring. People can get entertainment out of them. Which is what news is in a way.

We’re just giving it a go. Luckily we are getting pretty close to covering our printing costs. We knew we were going to have to take a bit of a hit with the first few issues. But we are getting a lot of feedback from people who want to advertise, so hopefully, we might start turning a profit.

Do you market the Inquirer anywhere else?

It’s been word of mouth. But, although I don’t pretend to know very much about it, social media has played an absolute blinder and has given us a massive boost.

Thankfully, we’ve got some young people helping us out, for whom social media is second nature. They’ve done an absolutely terrific job.

Elsewhere, BBC Radio Derby interviewed me. The response we had to that was a fantastic bonus.

I see quite a few freelance journalists who also do copywriting to pay the bills. What advice would you give to people considering journalism as a profession?

Now that is a tricky one. I find it almost impossible to give advice because digital is a whole new ballgame.

The only thing I do know is it’s dragged down wages because a lot of organisations hire people for peanuts.

But there are opportunities there. I think it is just a case of trying to grab work where you can and get your name known. Journalism is now and always has been a profession you have to persevere with. The more you do it, the better you get. Then you can gradually command better salaries. It’s because you are a much better journalist than you were when you started.

I belong to an organisation called ProCopywriters. It runs an annual survey and recommends rates to keep our value up. Does the NUJ (National Union of Journalists) support journalists in that way?

Yes. When you need the NUJ, as I have done on a couple of occasions, it has been a fantastic resource. Firms are always going to want you to work as cheap as possible. A strong union or professional body fight the corner for the people who work in the industry.

You don’t need to get a pun in every time. Try to tell the story in the headline. Often, the best headlines do. Also, don’t use cliches. If you are going to use a pun, it has to be something no one has read before. This one tickled my interviewer at BBC Radio Derby. It was a story about a lost ferret that had turned up and was accompanied by a picture of the cute ferret. The headline was:

‘Lost pet must be weaselly recognisable’

Also, be aware sometimes people will not understand your headline because you’re writing for an audience of your age.

In the June issue, we’ve got a story about a local TV superstar called Robert Lindsay. A picture of Lindsay on a beach with an item of plastic accompanies the story. Lindsay had tweeted “All this beauty, and still plastic turns up.” The headline:

Now you get that. But if younger people have never heard of Citizen Smith, the headline doesn’t work for them.

Where can people see a copy of The Ilkeston Inquirer, or indeed submit a story?

Grab your copy at https://www.ilkestoninquirer.co.uk
Also, please support us by ‘liking’ our Facebook page.

Thanks for your time and good luck with it!

If you’d like help with putting together an interview for your next blog post, drop me a line, and we’ll set up a time to chat.

Claire Hawes is a marketing communications copywriter. She enjoys writing engaging copy that helps businesses to get noticed and attract enquiries. Claire’s experience mainly lies in the business to business sector. Her clients include both businesses and digital marketing agencies.

GET IN TOUCH FOR COPYWRITING SERVICES